Scorecards is a user friendly web application that imitates a genuine boxing scorecard and allows you to easily score fights and keep a record of your cards.

Once signed in you can access the dashboard where you can start new cards, resume saved cards and view finished cards.

Scorecards is simple. From the Dashboard click 'New Card' and you will be taken to a screen like the image below. Just enter your fighter names and select a corner color. Then for each round you need to give both fighters a score in the 'points' column and if required add any deductions in the 'deds' column. Your totals will be calculated automatically. For tips on scoring a fight see the Scoring a Boxing Match section. 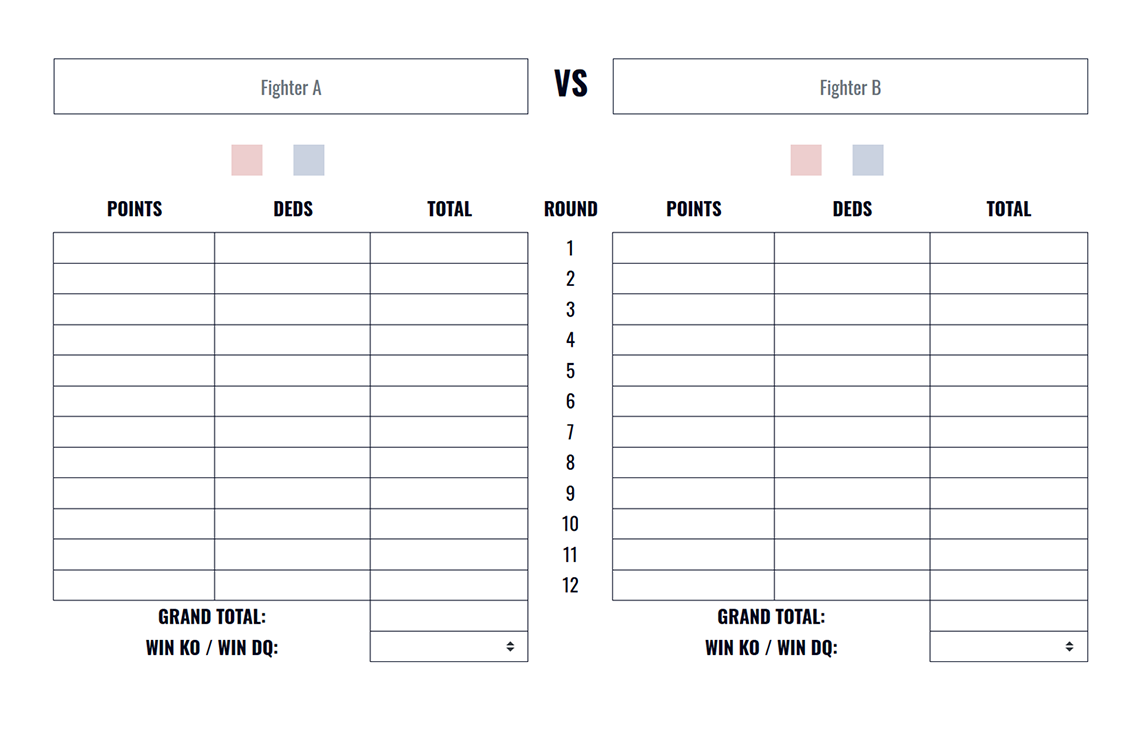 If a fight is stopped early, either for a stoppage or DQ, you can select 'Win KO' or 'Win DQ' for the winner beneath their Grand Total.

You can save your cards for later and pick them up again in the 'Resume Card' section. or mark as finished. All finished cards can be viewed at any time in the 'My Cards' section.

SCORECARDS assumes you are working on a 10 point must system, wherein for each round the winner must be awarded 10 points (not including deductions). The loser of the round will recieve 9 points unless knocked down in which he or she will receive 8 points.

In the event that you score a round even, both fighters are awarded 10 points.

There are occasions where a round may be scored differently to the above.

What do Judges look for when scoring a Boxing Match?

Boxing is a difficult sport to score as it is largely subjective. Each judge will have certain styles that they favour and this is why boxing often sees controversy surrounding the results of matches. With that said though, there are some key factors that every judge should use to determine a winner.

We use cookies so that we can provide you with the best possible experience.

Your comment has been submitted and is pending review. To submit comments instantly create a free account.

Your comment could not be submitted. Please check that you have answered the 'I am not a robot' question correctly. To submit comments instantly create a free account.

Your vote has been recieved.

Your profile has been updated.

There seems to have been an error. Please try again. If the problem continues email support@boxingfocus.com

You are about to delete your account. If you continue we will permanently delete your data including any comments that you have made on our posts. Are you sure you want to continue?

Your account has been deleted. If you were subscribed to our newsletter you will no longer recieve this.

We were unable to sign you in. Please try again.

Sign up to recieve monthly round-ups from Boxing Focus straight to your inbox!

You have been added to our mailing list. You should recieve a welcome email shortly. If not, please check your junk folder and add us to your contacts so that future emails get directed straight to your inbox.

Thanks for joining Boxing Focus!

It looks like you're already subscribed with that email address. If you haven't been recieving the news letter please check your junk folder. For further assistance contact support@boxingfocus.com.

Your cookie preferences have been saved. We will ask you to confirm this again in 30 days.